You can find a more complete list of what I've read on Goodreads.

A book on the ways that our "convential wisdom" on economics don't track to a wealthy society. Makes good points in favour of government spending that convinced my small-gov peabrain. Not as inspiring of a writer as Henry George though. Most of Galbraith's urged adjustments to our collective feelings about taxation and gov't spending are still undone. As relevant today as when it was written.

I do think there are some compelling counterpoints to Galbraith's criticism of private goods production. He often uses car manufacture as examples. He points out that the R&D put into new car models is goaled around what can be advertised to consumers to make them ditch their old models. I'm no fan of car companies so I'll give him that one. But, the computer and software revolution feels to me like a case where private companies have substantially improved the lives of the average person. The fundamental ground work for the internet, and computers, was laid by military research of course, but the private market used that kernel (heh) of research and infrastructure and fundamentally changed the world. Now, some people may argue it hasn't been for the better. We can agree to disagree.

Anyway in general I agree that we could do well to spend more money on public infrastructure. Now, exactly what infrastructure that should be is the tricky part. He makes a few to many favourable mentions of urban renewal projects and highway building for my liking...

Out of Africa by Isak Dinesen

Out of Africa by Isaak Denison is a memoir; a collection of stories from the life of a woman, and her time living in Africa Between 1913 and the early thirties. Denison is an aristocrat – a rich white settler in what is now Kenya. She owns a coffee farm in the Ngong hills, where the native people of that region serve her in her house and work in her fields.

The circumstances that allowed this woman to occupy a small piece of Africa are understood by the modern reader to be unjust. The British colonial empire has claimed for its own land which was already inhabited and used by people since the beginning of time. This woman does not herself work the land to which she lays claim; she uses the profits from her farm to hire servants and labourers. Her lover, a man named Denys Finch-Hatton, born in England and educated at Eton, seems to view Africa as his rich-boy playground; he inhabits it only so that he might shoot and kill all of it’s largest animals for trophies, yet manages to feel contempt and condescension towards the natives of the land.

Yet, out of this clusterfuck of colonialism and racism emerges a book that still finds itself read today, one hundred years later. Why? Our narrator, despite her position as gentlewoman strangler of African sovereignty, ends up being someone who is able to write about this place, and its people, with a level but empathetic voice. She sees the people of her farm as they are, and admires them all, Somali, Indian, Kikuyu and European alike. Can this woman be blamed for the colonization of Africa? I don’t think so, but I still cringe when I read some passages. It is her interest in the people of Africa, something that the other Europeans of the colony lack, which redeems this book. This book is a memoir; a memoir of the people of the Ngong hills.

Out of Africa meanders this way and that, with little point or explanation for itself. It is simply the account of one woman on a coffee farm in Kenya. The same way that this book takes its time leisurely, so did I, requiring almost a year to read it. I would suggest anyone else to read it in the same way. Pick it up when you feel interested, and then put it down again for a while. In this way the lack of a cohesive point becomes a benefit, and you will read this as a series of vignettes which may seem similar to how you remember your own life: a series of events, specific vivid moments and long blurry stretches, windows peeking into time that hide much more than they show. At the end of her book, when the house she has lived in has been emptied of its furniture and echoes with her footsteps, Isaak Denison is there, alone, sitting on a box of books with the moon spilling in through the windows, with only her memories left.

The Mennonites of St. Jacobs and Elmira: Understanding the Variety by Barbara Draper

As far as I know, this is an accurate history of the Mennonites of St. Jacobs and Elmira. The author is not an academic, and during some parts of the book I could sense her investment and involvement in the community she writes about.

Scaramouche might as well be called "The Forrest Gump of the French Revolution". Andre-Louis Moreau, also known as Scaramouche, quips his way from profession to profession, leaving no deed left undone – despite his own continual insistence that he is not a man of action. This prodigious prodigal son finds himself swept up in the events of the French Revolution after setting out to settle a personal score with his charming nemesis, the Marquis de la Tour d’Azyr; adventure ensues. This is a relatively straightforward story brilliantly told – the perfect adventure novel, with swashbuckling, one-liners, romance, and rivalry. The pacing is good, and the book is never uninteresting, though the back-half unfolds into a true page-turner.

P.S. Every time Andre-Louis wields a pistol, he lets his adversary know that he is about to “burn his brains” and I think that is the best action-movie-ism ever. 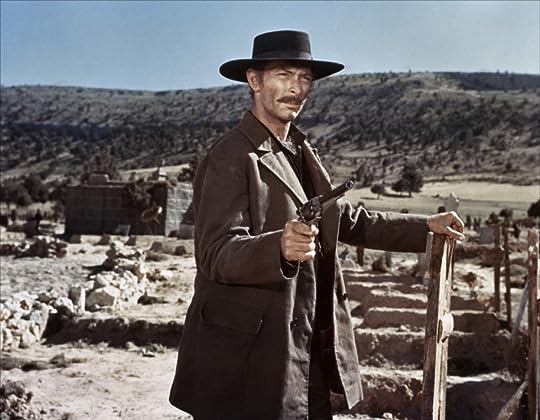 Pictured: a sympathetic villain, The Marquis de la Tour d'Azyr (How I imagine him anyway)

A book about the complexity, beauty and wonder of the human experience. A book about people.

Only, are these people that complex? They read like poorly sketched caricatures. The simple, sentimental dad who wants his son to see him. The brooding, sentimental son who wants to prove himself. The bitter, tightly wound, sentimental bank executive, the sentimental bank robber, the sentimental rabbit-man who crashes apartment viewings. Why is this book so goddam sentimental? It's like every ten pages the book is asking me whether I'm crying yet, and when I say no it's like ok how about now, now that I've told you just how sad all of these people are, and how deeply they care. We're all just really the same, right? We just want to be loved, right? Are you crying now?

I know this book really wants to be about the messiness of life. It wants to be that so bad. So why is everything in it so much the opposite? This book trying to seem chaotic is like that kid at your high school who didn't drink but still tried to show everyone how crazy they could be at parties. We know you're forcing it dude. Everything in this novel down to the last box of Christmas lights is exactly where the author left it. The cellphone is placed just-so, so that when it vibrates the gun falls off the table and fires. Luckily there's also stage blood on the floor there for some goddam reason so now when our policemen arrive on the scene they'll have a real time trying to figure out why the bank robber shot herself. I'm not nitpicking because this is a microcosm of the goddam entire book. Every character's plot arc is wrapped up so neatly that there's no room left for me to feel anything about any of it.

Why do the people in this book do things that no real people ever do? This is a book about people right? When I read a book about people I like for it be a little bit like how I experience people in real life. Do real people:
- decide to commit suicide because the bank took their home, and then leave a note for the CEO of the bank saying "It's not your fault"?
- Go to apartment showings for 10 years to look at a bridge from different angles because trauma?
- Hire a rabbit-man to ruin an apartment showing to drive down the price of the apartment to win a bid on the apartment to keep their husband's ego protected to keep their marriage intact?

The Shadow of the Torturer by Gene Wolfe

World building. Made up words. Bodice ripping (literally). What more could you want?

Seriously though, the world – more precisely the city and people of Nessus – is the main reason for my four stars here. Give me more ancient guilds, archaic ruins, murky political systems.

The Ones Who Walk Away from Omelas by Ursula K. Le Guin

In Le Guin's afterword to "The Ones", she clarifies a point that is ambiguous in the original text – she writes that freeing the child in the broom closet would doom every citizen of Omelas to "suffer as hopelessly as the child does now". My interpretation of the bargain as I read it was that freeing the child would merely cause Omelas to backslide from a Utopia to a mediocre city surrounded by plains, like Winnipeg.
This clarification makes the dilemma posed by this book harder to map to any useful moral question that faces us in the real world. If freeing the child dooms everyone to a miserable existence, including presumably the freed child, there is no utilitarian case for doing so. Is this a parable against utilitarianism?

The real life analogues for the child, the global poor, oppressed minorities, farmed animals, could they be saved without dooming us all? We could stop eating animals today and be healthier and richer. What if we had to stop benefiting from the plentiful, cheap labour of the global underclass? We would be poorer; would we be wretched? Le Guin herself doesn't think so; she wrote The Dispossessed shortly after publishing this story, an earnest exploration of anarchism and communalism, in which the materially poor society is much better off than the rich one.

In "The Ones", Le Guin seems to posit that the very moral virtue, scientific knowledge, and great art of this society follow from a child's torture. I cannot think of a real-world problem that puts us in this bind. If there is none, then why write this story? Why spend any time thinking about it? I admire Le Guin enough to hope there is a point here I am missing, but I don't see it.